Picturesque country of round mountain ridges with large forests, which are interrupted with glades of meadows and pasture lands, is a home for many rare species of plants and animals. Thanks to its beauties - outstanding natural and historical values which were formed during the long common life of a man and this country, it is one of the most frequented places in the Czech Republic.

PLA Beskydy is the biggest protected area in our country. It was established in 1973 on the area of 1160 square kilometres. It co­vers parts of Vsetín, Nový Jičín and Frýdek-Místek districts. The importance of the area is emphasized by the existence of 43 ex­tra protected areas, eight of which belong to the category of na­tional nature reserves.

Parent rock is formed by the rocks of sediment rock zone of West Carpathians. Its characteristic feature is alternation of pelit, aleurit, limestone and also conglomerat. Through the moun­tain-forming moves of Alpine folding, the sediment rock was formed into folds which are the basis for the present mountain zones of Moravian-Silesian Beskydy, Vsetínské Hills and Javorní­ky. They are broken up by deep valleys. The caves of Beskydy´s pseudokarst are an outstanding geological feature, which is the only one of its kind in the whole Czech Republic. Cutting down and burning of originally large forests in the mountain part of Beskydy which was conncted with sheep dairy-farming, were the main cause of creation of meadows and pasture lands. The country then gained its present picturesque character with typi­cal cottages of Moravian shepherds.

The woods still cover approximately 71% of the area. We can see the remains of original spruce growth as well as mixed forest of firs and beeches with sycamore maple and ashes in higher pla­ces. Beeches and remains of rustic hornbeam forests with imported limes, birches and elms occur in lower places. This species composition was changed by planting of spruce mono­cultures. National nature reserves (NNR) of Mionší, Salajka and Razula were established for protection of remains of Carpathian spruce-and-fir forest. Climax spruce forests are preserved in NNR Mazák and Kněhyně-Čertův mlýn. Forests of medium-high places with bizarre sand-stone rocks are protected in NNR Pulčín-Hradisko.

River network and its formation is another characteristic featu­re of this countryside. Local type of wild gravel—carrying streams, which disappearing species of plants and animals are dependent on‘ Is exceptional within the whole Czech Republic. This area includes the protected area of natural accumulation of water and belongs among the rich and high—quality drinking water resources in the Czech Republic.

Recently, the natural balance is being more and more impaired and insensitive interventions into nature and landscape of Bes­kydy are cat-t-jed out, such as planting woods with big share of spruce, insensitive regulations of water streams, urbanization of the area, inadequate recreational activities. Aiso the tradi­tional landscape character is being endangered as a result of abandoned ftelds. 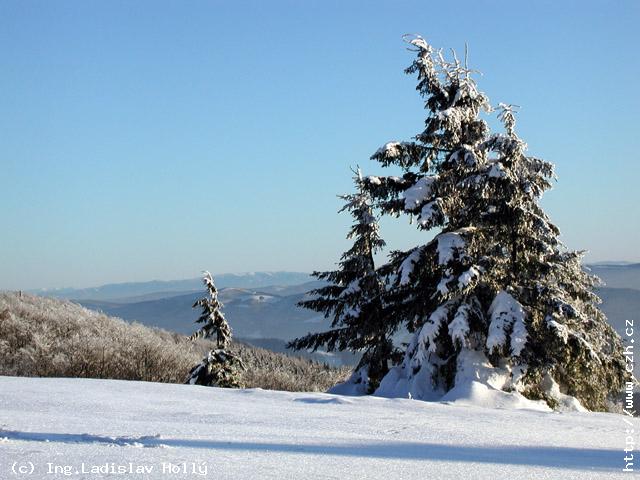