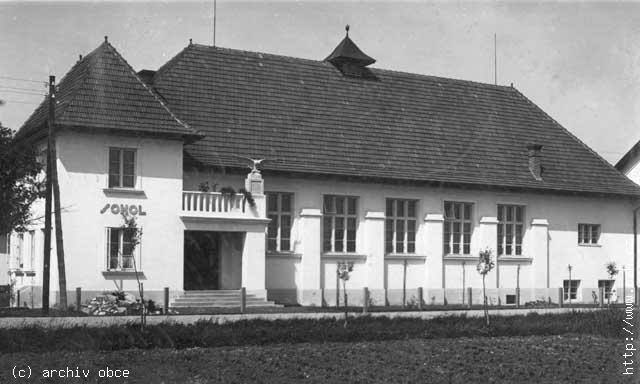 Albrechtičky Village belongs among the oldest villages. The exact date of its foundation is not known, but according to historical sources it already existed by the middle of the 14th century when the mighty Kravaře dynasty ruled the whole area. According to a document from Helfštýn castle, under the name of Albrechczicze, accrued to Štramberk castle after it split from Kravaře, which it had belonged to until 1437. The village had both good and bad noblemen in this 70-year period. Štramberk castle was occupied by force by Vilém Puklice of Pobořice in 1437 who made a robbers' den of it. Together with his associate Žick they robbed and captured travellers, imprisoning them in the castle and demanding a sizeable ransom for them. After him came Burian Puklice who controlled Štramberk. Albreczicze became an Episcopal feudal farm in 1437 and the farmyard at Nelhuble belonged to this farm. It is unknown which of the noblemen of Štramberk Castle sold Albrechczicze and which Bishop of Olomouc bought it. In 1481, clearly after the Kravaře dynasty died out, the kings Matyáš and Vladislav sold Štramberk together with the respective villages (Ženklava, Rybí, Libhošť, Veřovice, Mořkov, Hodslavice, Rokle, Životice, Žilina, Bludovice and one part of Závišice, the Episcopal feudal farm Skorotín and Albrechczicze, Velký Mošnov, Mošnovice and the farmyard at Nelhuble today's Nová Horka) to Potáz brothers Dobeš and Beneš of Boskovice. Nevertheless, they sold it in the very same year to the nobleman Beneš of Hustopeče. After him, Štramberk fell upon Lacek of Hustopeče who gave the village a "death" grant. Bernard of Žerotín purchased the Štramberk estate together with the feudal tenure of Nová Horka from Lacek of Hustopeče in 1523. In this way the feudal tenure was counted to the Fulnek domain. The Farm of Nová Horka became independent in the mid-16th century and Anna Maria Cetrysová of Kynšperk got it by inheritance from her father Oldřich Cetrys. Jan Sedlnický of Choltice was the first nobleman known to have occupied this new seat since 1590. The essential part of the former farm consisting of farmyard at Nová Horka, Skorotín, Mošnov and Albrechtičky was then granted as an Episcopal feudal tenure of Olomouc Bishops until the decline of feudalism and the seigniorial system in the 1860s. In the course of the centuries, Albrechczicze belonged first of all to Jičín castle in the 13th century, to castle Štramberk in the 15th century and then to Nobleman Beneš of Hustopeče.
Since the 16th century it fell to a newly established seigniorial seat at Nelhuble - Nová Horka.

In the Middle Ages, Albrechczicze Village belonged to the most moneyed in the locality. Quite rightly we can say that it had its golden age in the Middle Ages. Meadows at the Odra river from the Petřvald boundary as far as Bartošovice were the cause of its prosperity. These meadows made it possible to breed many horses, beef cattle and pigs. The village had its municipal field land, which the income from was used to cover all the municipal expenses. There were neither socage nor proletarians till the end of the 16th century because all 7 small farmers found enough means for their livelihood in the hire of the village field land. Nevertheless, this affluence drastically changed in the time of the unhappy Thirty Years' War. A great many of those who did not want to renounce their belief preferred to leave their farms and escaped abroad. A great many of them went bankrupt after being plundered. And the village not only lost half of its inhabitants with the result that many dwellings became deserted and arable lands were left lying fallow, but the village itself was robbed of the larger part of its property. But the greatest injury suffered by the village was the fact the parish field was confiscated by the manorial nobility and handed over to foreign hands. It was not possible to re-establish the parish at all and it was assigned to a parish at Bartošovice at first and later to Sedlnice becoming Germanised in the meantime. At one time, the affluent village sank in this way. Nevertheless, there was one thing it still did not lose - its national consciousness. All the neighbouring villages became Germanised in great part, only Albrechczicze stood here like a cornerstone against which all the Germanising waves broke. In this way the village led its miserable existence through the 17th century. In 1660, Counts Vetter of Lily bought the estate Nelhuble and his descendants were also the last owners till 1945. Counts Vetter made it possible for the parishioners to visit the former derelict church. Every fourth Sunday priest of Sedlnice celebrated the Mass here with the presence of Counts. How bitter the connection probably was with that one-mile distant parish and what's more, a German one. The priest had to be driven here for every occasion. Nothing changed in the 18th century in this respect. Perhaps the only thing - in the place of the ruined tower, Karel of Vetter got to build a new one in 1777. The church was reconstructed and the cemetery was enlarged. Count Karel Vetter got to build a chapel at his new chateau at Nelhuble where he kept a priest. The inhabitants of Albreczicz Village used to visit the quiet Divine service celebrated in this chapel for over 70 years.
The village lived through a disaster in the second half of the 18th century completely destroying its welfare: the manorial nobility confiscated one half of all the meadows at the Odra river from the Albrechtice farmers and imposed various taxes on the remaining part.

There was one slaters' in the village before 1910. They introduced a concrete works with the production of concrete well tubes, wall tiles, fence poles and various other concrete products at Nová Horka after World War I. Karel König, owner of the firm till 1945, as a German soldier died in the war and his possession was nationalized. There were 20 persons carrying on trades, namely 3 tailors, 1 dressmaker, 1 bricklayer, 1 smith, 2 publicans, 3 dealers, 1 cobbler, 1 joiner, 3 butchers, 1 producer of carbonated water, 1 wheeler, 1 baker and 1 hairdresser in 1921. Štěpán Barvík established gardening with the growing of vegetables, roses and decorative flowers in the village in 1930.

Albrechtičky as an agriculture village was oriented since long past to breeding stock and horse, pig and poultry breeding. Albrechtičky Village alone (without Nová Horka) possessed altogether 390 hectares of whole cadastral land till 1918.
Of this: 300 hectares was arable land
27 hectares meadows
16 hectares forestland
17 hectares of pastures
10 hectares of gardens
5 hectares of built-in area
15 hectares of village squares, roads and other areas
Farming on these plots of land was concentrated into 17 farm holdings and many other smallholders' farms. It is not possible to describe the allocation of different agricultural plants as for number and area because of continuous changes.
All the agricultural land at Nová Horka with the exception of an insignificant number of hectares belonged to the big landowner Count Vetter of Lily. Part of land was confiscated from him in 1919 and it was handed over to the users. In 1921 - 1923, land for the construction of family houses was expropriated, and in 1924 -1926 expropriated land dedicated to smallholders and landless persons; the applicants both local and those from outside of our cadastre were given the land. Fields and meadows were given into the hands of smallholders on the basis of Decrees of the President of the Republic from 1946 - 1949. Ponds and forested area were taken-over by the Czechoslovak State. The chateau was assigned to the Charita (institute for people advanced in years) and farm buildings together with flat units were handed over to the possession of private persons living at Nová Horka.

In Albrechtičky Village, the so-called SAZS (Spořitelní a záloženský spolek - Savings Association) Ltd. was founded. At the time of its foundation, the Association had 32 members, but by 1938 even 160 members. In 1940, during the time of the Protectorate, the occupation administrative ordered the fusing SAZS and Raiffeisen Savings Bank at Mošnov, the latter being German. This intended plan was subsequently abandoned and only citizens of German nationality were appointed to the managing board and supervisory board of the SAZS. In 1910, there were 4 pubs and 4 shops in Albrechtičky incl. Nová Horka, where there were also 4 pubs and 4 shops in 1930. In 1924 they electrified Albrechtičky; the financial means for the installation were received from the sale of the local pub.

Amateur acting and public enlightenment started in Albrechtičky Village in 1893. They founded Reading, Singing and Amateur Theatrical Association named "Metoděj" there. In 1909 the Orel Union was founded - active till February 1948, when it was dissolved. In 1910, the so-called Národní Jednota (National Union) of Albrechtičky was founded, but liquidated in 1925 in favour of the Národní Jednota founded in Nová Horka in the same year. The Sokol Sports Union was founded in 1911.
Albrechtičky Village was always an agricultural village from the village management point of view, the leading position of Agrarian Party men being the proof of this fact. In 1907, the first Workers? Association was founded, organized under the auspices of the Social Democratic Party. Albrechtičky citizens welcomed the declaration of the Czechoslovak independence in October 1918 with great enthusiasm. The Social Democratic Party became the leading party in the village after the granting of voting rights to the working classes, women and people without means in 1919. 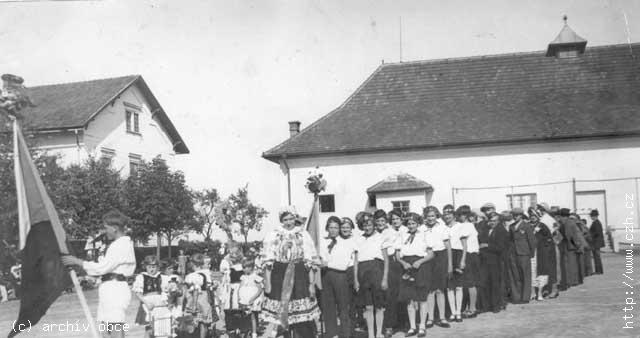